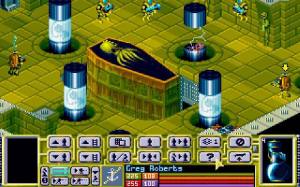 I nearly cried a couple of times…and yes, I nearly started from my last save point just because it was so hard to take, I loved that little pixelated princess, I’d named her Barbie but she was harder than Rambo, but then Rambo never fought a lobster with grenades!

Of course I’m talking about X-com: Terror From The Deep. A game that many believe was ‘too difficult’ and in fairness I’ve never gotten off the ‘Easy setting’ (I’m not using any patches of which there are a few to make it easier).

So what makes this annoyingly difficult game so addictive? For me it’s the full package, it has everything. Research, Manufacturing, base construction, real time Submarine fights and awesome turn based tactical battles. Plus you get to watch your soldiers grow into mean machines, providing they survive only 2 of mine have from the beginning, well… only one now! R.I.P Barbie.

I’ll start from the beginning: something is stirring in the oceans; Aliens are wreaking havoc on ships and ports all over the world. You are the commander of a secret agency called X-com; your job is to ensure the survival of humanity. Your first job is the location of your initial base of operations, this is possibly one of the more important decisions as the worlds governing bodies fund you individually based on your performance in their area! So placing your base in the Antarctic means you’ll struggle to get to the enemy in the Russia. I placed mine by Italy so covering Australia and the USA is difficult to start with, but keep doing well and you’ll be able to afford a new base and better sonar radars in no time!

So you get the idea? You’ll start out with quite a few basic things in your base like 3 sub pen’s 2 barracuda’s attack craft and 1 Triton personal carrier (the former for sinking their subs before they can cause trouble and the latter for sending in your elite troops to finish the job). You have to know who you’re fighting against so naturally my first purchase was 10 scientists, and I needed someone to fight with so 5 more ‘Aquanaughts’ ought to do the trick, but before I could say extraterrast…extreterri…. Extratarrest… that long word for aliens! I was hunting down my first ‘small’ alien sub. It got away, but I don’t give up easily so I was back on their tail once again. GOTCHA!!
With a PEEEewwwww and a RUTUTUTUTUT (the sound of my sub’s weapons, not me slowly turning into a dribbling mess) he’s down! Time to send in the Aquanaughts!

Harpoon guns loaded I head out of my Triton and on to the ocean floor, surrounded by Darkness I try to figure out in which direction the alien submarine crashed. I pull my first Aquanaught to the left of the ship… nothing but the maps edge and not enough time units to do anything else, my next one to the right, when, half way toward where I want him to be, a stream of green flies across the screen… he’s hit and goes down screaming, that’s when it dawns on you under water… Everyone can hear you scream! On the bright side to that brave soul losing his life, I knew where the alien was and exacted  vengeance swiftly! It was being kind to me! Not only had I killed an enemy but I’d won the battle. Most of the others died in the crash it seems…at least the seas will be safe… for now.

My tip for survival in all missions is: try to catch the daylight! If it’s night time when you land, the enemy has the upper hand as being from the depths of the ocean they can see much further in the nocturne than us topsiders, and they wont hesitate to fire at ‘Will’ (my only surviving original Aquanaught!).

Of course the further you get, you’ll encounter more dangerous enemies on different terrains, including terror missions which take place on a port or a boat for instance, even defending your own base from attack!

And my biggest fear of all is that Will’s will, will fade! Psi-power is something you’ll come across and until you can utilise it, be very afraid! Just when you think you’re getting the upper hand and you’ve got top of the line weapons, our deep sea foe takes control of one of you’re elite and makes him turn the newly researched and still shiny Sonic Cannon on you’re team taking out a few before you have to take him/her down. Unfortunately we can’t research tin foil helmets with metal coat hangers attached!

Let’s move on to the game play itself. As I’ve previously mentioned, the battle scenes are turn based- this basically  means you can move your troops into position and try to outwit your opponent but you only have a certain amount of moves to do so (much like chess I suppose). There are many other factors to take in to account whilst moving your underwater army, things like strength (you don’t want a weakling carrying a heavy gun!), bravery (will they freak out when they see a giant jellyfish with a humongous brain hurtling toward them… I would) and, of course, you don’t want your elite super soldiers standing out in the open for too long, so staying close to walls is essential! They will gather better stats as they gain experience out in the field like improved accuracy and bravery, So all this happening on the battlefield and the optimisation of your base, research and manufacture of equipment to hunt the beasts down whilst convincing the worlds governments that you are able to do the task they’ve set you, that’s what makes this game hard!

The only real drawback for me, aside form crying over spilt pixels, is that the battle sequences can go on for what seems like an eternity! Just as you think you’ve got the last of the alien menace, you press the end turn button expecting a glowing report on how well you’ve done only to find there is one left hiding somewhere making no attempt to attack… so you have to check the whole map over looking for it only to realise it was hiding in a tiny cupboard 2cm away from where you were standing in the first place! And as soon as you open the door ZAP! You’re toast…

And the reason for my re-playing one of my favourite childhood games? Well I’m sure you are all aware of the new re-imagined X-com coming to all major platforms this October (9th US and 12th UK). If you’ve not had a chance to get acquainted with the series yet and don’t know why I’m making a fuss, head over to Valve’s Steam where you can pick up the whole back catalogue for less than £7.00. Play them, realise the awesomeness and get excited too!