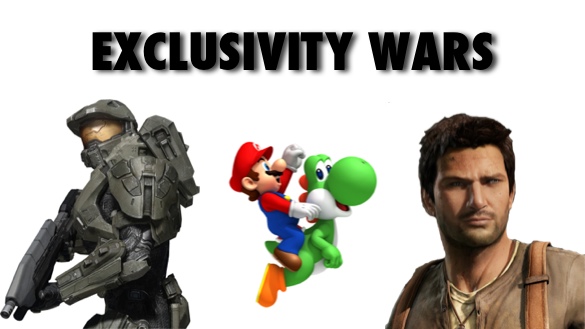 From Metroid to Bandicoot, Gears to Killzone, Forza to Grand Turismo, all major players in the console market have their beloved and exclusive video game franchises, which in most cases they either developed in-house or paid a King’s Ransom to have. They’re also constantly trying to 1up each other, be it with exclusive content or early access to games or DLC. And before you stop reading this article, NO this is not an article about whose better Sony or Microsoft, in the next thousand words or so I hope to explain that having exclusive titles and different consoles  is hurting the video games industry and by default hurting the consumer! So why do I think this, when  some of the best and most innovative video games are exclusive and the video game market as never been this popular and completive.

Yes it’s true, some of these exclusive games are great, and they also help sell consoles in some cases. But even though you have a certain degree of innovation in franchises like Halo, Uncharted, Mario, to name but a few, and these franchises have scooped up many awards over the years, true innovation doesn’t spawn from the console market, it comes from the PC market, some of the best video games ever made were created for the PC; System Shock, Deus ex, Half Life, Portal … the list goes on. There’s also the modding and indie community, allowing for great games to be greater or in some cases inspire complete new IP’s like Portal, Left for Dead, Day Z, etc. So if innovation can be achieved within a single platform, why is there such a booming console market? The answer is price, having a PC that can run the latest game with all the bells and whistles turned to 11, and sill get enough frames per second to be able to enjoy it, is going to cost you more then the average console retails for and don’t forget that PC’s depreciate a lot faster then consoles do, finally not a monetary problem but a problem non the less is convenience, in most cases you stuck to your desk, instead of in the comfort of your sofa, or if you own a Wii jumping about in front of the living room TV.

So one option is to buy or build yourself a gaming PC, There are many guides on the internet that will help you build a sub £300 rig, this would give you better then console graphics, more processing power and all the mods you can shake a stick at. As for convenience you can hook it up to your TV, connect a wireless gamepad to it and the previously mentioned comfort of your sofa can be achieved, you even get an added extra, PC games generally tend to be about 30% cheaper then console games.

So there you are, you have yourself a solution? Well no, not really, most people still just want to buy a console and not have to worry about all the extra baggage PC gaming brings; you don’t need to mess about with the video settings (AA & AF, VSinc, Triple Buffering, draw distance), you don’t have to experience the  failing when you  install a game only to find it doesn’t work properly and some cases work at all because when a game fails in a PC it can be down to a variety of potential faults, this is a feeling familiar to many readers I’m sure, you then proceed  to spend the next 3 hours browsing the web searching for a solution, occasionally getting distracted by a youtube video of a cat playing the piano (time you should  can be using to read the articles at monkeytail.co.uk) and finally my pet hate messing about with router ports and firewall settings so that I can play online.

Ok, granted there are solutions for most of the problems described above, game developers some times include a button that selects the recommended video settings for your PC, and they publish FAQ’s and forums that can help you with most problems. All this helps and but the beloved console is still the best all round solution for your video gaming needs, you just connect it to your TV, put your favourite game in the disk tray, and like magic everything is optimised, patched and internet ready! So the console is here to stay, but we still have the exclusivity problem, do we really need to buy all available platforms so that we can enjoy all the exclusive games or do we just pick a side and end up missing out on many gaming gems, do we want to keep playing lo-res ports of PC games? Well I don’t and I think I have the solution.

It’s simple, one console for all games, a hybrid gaming machine that is upgradable, possibly with slot in components so that in a few years if more powerful games are developed you can buy an upgraded GPU or CPU and just slot it in. All the major publishers would need to be onboard for this to work, same goes for all the stores; Apple, Steam, Origin, Microsoft, Android market, etc. This way every one wins, multi platform developers can concentrate on developing games for one platform only, this will allow them more time to be creative, rather then spending time trying to make their games work on every platform. The so called “In House” developers will have a bigger audience to enjoy their games, and of course make more money overall and us “the consumer”  will get, a larger pool of games to chose from as well as more variety, not to mention more people to play with on-line and in some cases shoot at.

So to summarise, lets stop this video game exclusivity kerfuffle, one console for all games is the future, and if history is anything to go by, it will happen, like any war, and this “exclusivity war” is no different, there are many battles but there can only be one winner, and console giants will be thrown out of the console market, remember Sega or Atari, my prediction for the next gaming behemoth to fall is Nintendo.

The future of video gaming is digital and it’s time it can all be found in the same place.