Halo: Combat Evolved, is a science fiction first-person shooter video game developed by Bungie. This was the first game of the Halo franchise, it was originally developed for the pc, but later made as an XBOX excusive, released on November 15, 2001 as a launch title for the Xbox gaming system, it sold more than five million copies worldwide as of November 9, 2005 and it’s second only to its sequel, Halo 2, in sales for the Xbox video game console. The game was later released has a Xbox Arcade download “Xbox Original”, and more recently an HD remake was released to celebrate it’s 10th anniversary, this excellent remake was developed by 343 industries, the new home of Halo.

Halo is set in the twenty-sixth century, the player assumes the role of Master Chief a cybernetically enhanced supersoldier. The master Chief, or John 117 to his friends, is accompanied by an artificial intelligence called Cortana, who occupies the Master Chief’s neural interface. Players battle various types of aliens on foot or in vehicles as they attempt to uncover the secrets of the eponymous Halo, a ring-shaped artificial world. 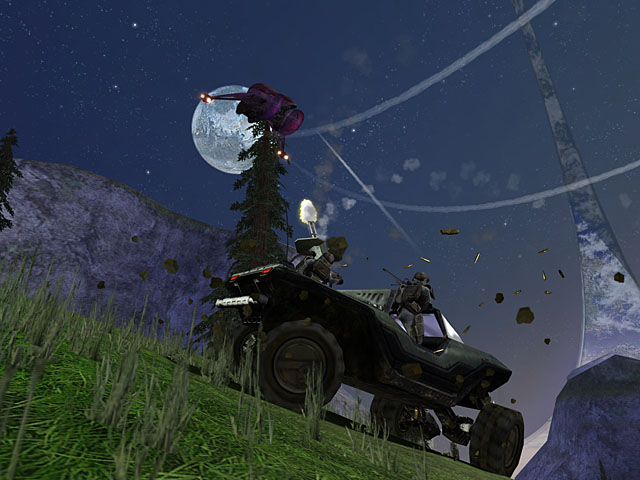 Halo pushed boundaries and expectations with its storyline, a gaming facet that often struggles in FPS’s. Superbly paced and very well voice acted, the story for once gave clear meaning behind your activities in game. Halo is widely considered to be one of the best, most influential and innovative first-person shooters of all time, it helped bridge the FPS gap between PCs and consoles, spawning many imitations of so called “Halo Clones”. Halo was the first game to successfully introduce, what we now call standard features in modern first person shooters, features such as the two-weapon limit, dedicated grenades and melee buttons, regenerating shields, all these features created the blueprint used by 99% of modern console shooters! The popularity of LAN parties also helped pave the way to the excellent Xbox Live service, which in turn started this craze we find ourselves in where a new online shooter gets released every 5 minutes.

There are lots of other great things about Halo, like the excellent vehicle system, the system-link multiplayer (the reason I bought an Xbox for) and the fact the game introduces a third entirely new faction halfway through the game, but the most innovative feature was the groundbreaking AI, which used the “I” in it’s name to great effect, when you selected a higher difficulty setting, rather then the usual game mechanic other games gave you, like throwing more enemies  at you and give them extra health, or the flip side of giving you less health or ammo, Halo merely upped the intelligent of it’s AI, to this day Halo’s Legendary campaign is still one of the hardest to complete. With all this pedigree Halo: Combat Evolved is a worthy addition to the Monkey Tail Hall of Fame.