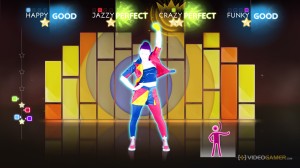 As the other members of the team were forced into long queues for demo’s I was given the opportunity to play some of the less hardcore game releases, The benefit for me was less time waiting more time having fun, Dance central is just that a lot of fun and it brings the best out of the kinect which in my opinion is what kinect should be used for.

The game itself brings much of the same from previous releases however now has more songs more options and the interface seems smoother if you have played any of the others you will know what you are getting and if you haven’t then maybe this is the game you should buy to finally get some use out of the kinect that is gathering dust. As I said it isn’t for everyone however once you get used to the moves it really is a lot of fun and good exercise thrown in. I was placed in a dance off with a girl dressed as portal cube she had clearly played before and quickly had the upper hand on my ageing sizeable frame it didn’t help that I didn’t know the song, however it didn’t stop me trying and I still had a lot of fun.

In summary anyone who has a kinect should have a version of this game as in my opinion it’s the best out there and given time you can learn the songs and learn the moves then it really does become fun.

I have not played Just dance before so didn’t know what to expect. I was placed in a dance off with a guy dressed as the Mask who I later found out was a professional dancer, in reality though it wouldn’t make a difference who he was though because this is a Wii game and you only need to wave the wii remote around to play and as only he had one how much could I contribute. Still it didn’t deter me from giving it my all which I did.

For me the game felt detached as I really didn’t need to be there and that took away from any fun I could have had. The Two games are not comparable and if you have a choice between this and Dance central then you really should pick Dance Central it’s so much more responsive and you really do feel you are performing the moves when you get them right.