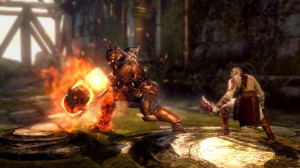 Unsurprisingly the first thing that hits when the God of War demo loads up is how good looking it is. Already a good looking series this is a clear step up from God of War 3 with huge vistas and plenty of things happening on screen. The single player demo starts with some standard God of War combat against low level enemies. Those like me who are familiar with the series will slip into the shoes of Kratos without the need to learn many new skills.

After hopping off the boat he was travelling in, well I say hopping but Kratos isn’t the sort of guy who hops or skips. He is set upon by a gang of ‘goaty things’. I am sure they have a proper name but that’s what I’m going with. These are dispatched with a few standard combos using the Ghost of Sparta’s famous blades along with weapons picked up from fallen foes.

Some sort of vast tentacled beast then plucks a boat from the ocean and throws it at the pale warrior but Kratos dodges and it destroys his escape route. Queue a new power as Kratos rewinds time to see the debris reform before him, allowing a quick climb to bring him to another battle with goaty things. They are supported by a knight with a huge hammer who thinks Kratos is a nail, but he doesn’t last long.

Finally there is a battle with a strange man elephant beast which ends with Kratos splitting the poor creatures’ skull open to expose its brain before stabbing it to finish him off. Kratos doesn’t even have time to wipe the blood of his enemies from his skin before he is plucked from the ground and flung in to the air towards the creatures waiting jaws, at which point the demo ends. Phew.

As a massive fan of the series I was hugely impressed and cannot wait until March 2013 when it’s due for release. Those who have never got on with God of War however will find nothing new or different to draw them in but for everyone else Kratos’ final outing on PS3 looks to be another fantastic game.