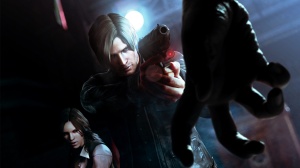 Can you ever have too much of a good thing? A key question when discussing the merits of Resident Evil 6, and undoubtedly one that echoed through the halls at Capcom during its production. In truth, the latest instalment of the long-running action horror franchise is a sprawling mess; crammed full with such an unbelievably huge amount of content it lacks any sense of coherence. The news isn’t all bad, however, with the game possessing enough solid gameplay to almost forgive its many shortcomings.

Firstly, the ‘is it or isn’t it survival horror’ argument. In reality, Resident Evil has long been far removed from the survival horror genre. We have to go way back to the era of Jill Valentine evading the Nemesis through the streets of Raccoon City, or Claire and Chris Redfield deciphering Code: Veronica, to truly experience the series in all its horror glory. Resident Evil 4 marked an almost complete shift in terms of style and gameplay, and the series hasn’t looked back since. While internet fanboys continue to howl in derision, I personally find the newer games in the series to be as valid as the first, although a little more in the scares department would always be welcome. Resident Evil 6 generally continues in the style so memorably introduced in the series zenith, although there are a few new additions to the gameplay that veer wildly off piste.

Players have three distinct 8-10 hour campaigns to choose from initially, with a fourth added once the main three are done and dusted, plus mercenaries and agent hunt supplementary modes. Play as Leon Kennedy, and you get an experience akin to the Resident Evil of old, with the familiar shuffling zombies as your main foes. Play as Chris Redfield, however, and you get an attempt at a third person shooter that borders on the laboured, with each chapter feeling like a never-ending slog. Mutant boss battles last for an age and quickly become dull, while your ammo is constantly depleted to the point of annoyance. There are no scares here either; just a predictable and bland shooter that quite honestly has no place in the series. Chris’ campaign is easily the worst thing about Resident Evil 6, and matters aren’t improved by the man himself being characterised as so petulant, dour and unlikeable that time spent in his company feels like a punishment.

The third campaign centres on high-kicking newcomer Jake Muller, with series favourite Sherry Birkin partnering, and is more similar in tone and gameplay to Leon’s campaign. Herbs are still the order of the day for replenishing health, although now there’s a nifty tablet container to allow speedy first aid. The weapons system, too, has had a bit of a spit and polish, with players now able to swiftly change from one weapon to another through the generally successful HUD element. This all honestly feels like window dressing, however, to attempt to disguise the fact that we’ve seen all of this done before, and done better.

While the gameplay, apart from Chris’ campaign, is enjoyable enough, there is very little innovation here, and the game quite often feels like an inferior clone of Resident Evil 5. Having said that, the co-op is markedly improved from Chris Redfield’s African adventure, with less of the AI glitches and niggles that bothered the last main series entry. The previously mentioned HUD system is a neat addition, allowing players to keep a constant eye on their health and ammo status. An even better move by Capcom allows you to tailor the game’s display to your own preferences, meaning the HUD can be hidden completely should you so choose. The action gameplay is smooth and efficient, with the melee combat system proving to be surprisingly useful and satisfying, and the graphics are undeniably good, with locales and characters displaying first-rate design.

It’s hard to escape the feeling however that Capcom have lost confidence in their once magnificent baby. There is so much crammed into Resident Evil 6 that very little actually stands out, and the whole thing reeks of an insecure company trying to please everyone, and placate the fanboys. The heavy amount of chaff here, such as the fairly redundant upgrade system based on collecting skill points, means that the good stuff (and there is good stuff here, rest assured) is buried.

So all in all Resident Evil 6 is not a complete disaster by any stretch of the imagination, but we are left to wonder what might have been, had Capcom not been so eager to cover all the bases.