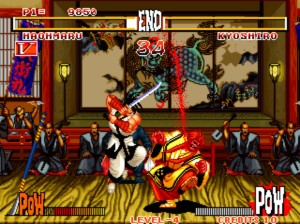 ‘A samurai fears nothing, struggles to triumph over evil. And lives for one purpose. To destroy all enemies.’

So reads the introductory loading screen for Samurai Shodown (unusual spelling absolutely intended, as in the game). As the music thrums to life, and the start menu loads, a familiar feeling builds. That feeling is pure, unbridled focus. Focus to destroy all before me. They shall feel the wrath of my katana and weep the tears of their destruction. Before all that though, let’s backtrack a step or two.

For reasons of full disclosure, I could possibly be a little bit of a games hoarder. I still own a cherished copy of the original Sonic The Hedgehog, and it will remain in the pristine condition in which it currently resides until the end of days. Of course, to play an original Sonic you generally need an original Sega Mega Drive, which I have recently drawn out from its well-protected slumber to embark on a journey through gaming nostalgia. Golden Axe, Streets of Rage, and of course the aforementioned Sonic will all have their moment, but tonight it’s all about Samurai Shodown.

Known as Samurai Spirits in its native Japan, this SNK brawler was an arcade classic before its debut on the Neo Geo system. Ports onto various systems (including the Mega Drive) followed, as did several sequels. Released at a time of cultural nadir for the humble beat ‘em up, the game offered an Eastern twist compared to its contemporaries. No Street Fighter brawling or Mortal Kombat combos here. Instead Samurai Shodown offered surprisingly elegant gameplay, with a cavalcade of tricky special moves to master. To truly excel in the game the player needed to develop great timing and a knack for the most appropriate use of the blocking mechanism. Matches were won or lost based solely on clever blocking and perfectly timed jumps. Ah, yes, jumping. A wonderful gameplay quirk invites the player to use the left and right sides of the screen as a sort of springboard, allowing for ninja-esque double jumps. These moves could often prove critical if backed into a corner by a particularly aggressive opponent. As befitting a game based around a samurai mythos, the main character weapons are lethal katana swords. There are exceptions, with one character in particular wielding razor sharp Freddy Krueger style claws, but the game generally revolves around sword-based combat. This allowed for stylish slash attacks, and also threw up the occasional duel style event, in which the player who could hammer the appropriate slash button fastest usually emerged victorious. This could often introduce a level of unpredictability to battles, with a player on the back foot sometimes afforded the opportunity to disarm an opponent. Which leads us nicely back to the start menu, and my foray back into the world of the samurai.

My favoured character is Nakoruru, a sprightly female ninja with an eagle to use in special attacks. Yes, that’s right, an eagle. As my first battle of this session loads, against samurai sword master Jubei, the wave of nostalgia flows over me. Amazingly, the controls and special moves rush forward in my brain with little delay, as if recalled from a specially evolved section dedicated to remembering gaming controls. I swiftly dispatch my foe. Further rounds against varied opponents follow, some more challenging than others. The character Charlotte, a vivacious French fencer, proves a tough draw, but I eventually vanquish her. Now I remember why I hold such fondness for beat ‘em ups, especially ones like this. Although my thumb aches from fevered D-Pad manouvres, and my back is stiff from hunching in front of the TV screen (no wireless controllers here), there is no better feeling in gaming for me than that moment when a tough opponent falls under my sword. As the referee exclaims, IPPON!